Special Rewards - Book 2 of the Coursodon Dimension Series - is now available on Amazon and Smashwords!

What would you do if you discovered there was a parallel dimension? 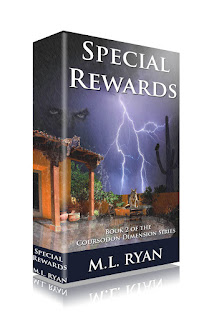 Hailey Parrish used to be an average, everyday human.  Boring, in fact.   After being possessed by Sebastian Kess, a magically-inclined enforcer from the parallel dimension Coursodon, her life took a decidedly less mundane turn.  Besides coming to grips with the existence of supernatural beings, she risked her life helping Sebastian and her heart falling for his protégé, Alex Sunderland.  Now, Hailey has to deal with the bit of arcane power that Sebastian left behind when he returned to his own body and try to stay out of the crossfire when an unknown assailant seeks revenge against Alex.