It's hard to write when you're with 16,000 gastroenterologists

From Friday until Tuesday, I am in San Diego for a conference (for my day job).  At this conference are thousands of gastroenterologists from the U.S. and around the world.  And let me tell you, you haven't lived until you've spent a weekend with a bunch of people that, in most cases, spend their professional lives sticking things up people's butts (At least I hope it extends only to their professional life, because I don't even want to imagine them doing that in a non-professional setting).

These meetings used to be more fun when the "vendors" that flock to these things like flies on shit (I had to use that; it is a GI conference after all) were allowed to woo the attendees with awesome giveaways.  Like fancy backpacks and full sized fleece blankets.  For a awhile, the Fleet Company had a person dress up like a super-hero enema, called "Eneman".  They even gave away plush stuffed enemen, because who wouldn't want a stuffed dude with a phallic appendage sticking out of its head?  Now, you're lucky if you can scam a free pen.  I know it's better for these companies to not influence the M.D.'s, but us scientists are poor.  We can use the free swag. 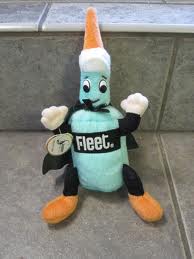 Anyway, I haven't had a chance to get much novel writing done while I'm here.  During the day, of course, I have a multitude of scientific sessions to go to.  Today, I even gave a talk, which required a certain amount of advanced preparation.  Like I had to put on makeup.  In the evening, these party-animal GI people always want to get together - mostly to eat, although drinking comes in a close second.  And I'm supposed to be here not only to disseminate important scientific facts (and learn some, too) but also to make connections with other scientists.  So I kind of have to go out with these folks, even if I'd rather hole up in my hotel room (which, BTW, overlooks Petco Park where the Padres play baseball) and write another chapter.

But I think the real problem is I'm in my scientist mode throughout the day AND evening, and it's hard to switch over to author mode.  I'm really writing this hoping it will stimulate the other side of my brain so I can get back to Hailey and Alex and the parallel dimension.  Maybe I should have brought eneman for inspiration...
Posted by M.L. Ryan at 5:33 PM